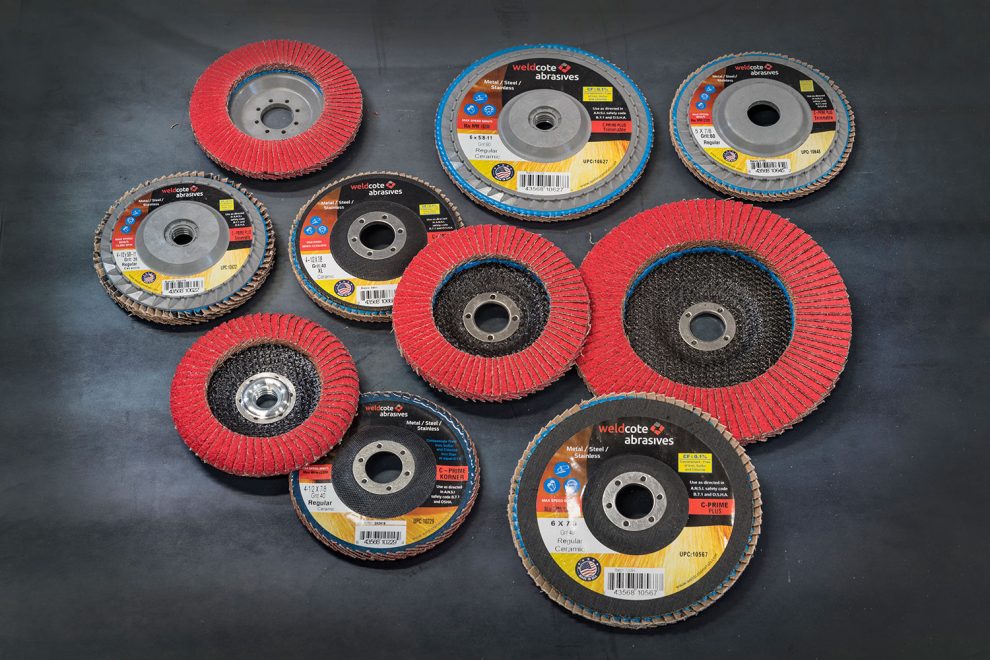 New technology is making the flap disc a cost-effective and equally effective alternative to grinding wheels in a variety of applications. They’re versatile, lightweight, easier to control, and convenient.

Here are the six components that comprise modern flap discs and the advantages they provide.

First: What IS a Flap Disc?

A flap disc is an abrasive product designed for right-angle grinder applications that consists of overlapping abrasive “flaps” glued radially to a backing plate. Flap discs became popular for benefits like fast stock removal and the ability to perform grinding, blending, and finishing in one product.

Second: Why Use a Flap Disc?

Many flap discs remove up to five times the material with less workpiece gouging than standard grinding wheels. They’re also easier to control, which leads to better workpiece quality and less changeover. Without the need to change out grinding wheels, users experience less downtime, less glazing, loading, and workpiece discoloration. In addition to their ease of use, flap discs are also preferred by operators because they produce lower vibration and noise levels.

And now for the six major components.

Flap discs come in three shapes. Which you prefer depends on whether you want the smoothest finish possible or need to remove as much material as possible in a short amount of time.

Flat flap discs (also known as T27) are used for working on flat surfaces and are most popular for edge grinding and deburring.

Conical flap discs (also known as T29) are designed for excellent surface conduct and aggressive use. Many users choose this shape for heavy stock removal (hogging welds) on flat grinding applications to quickly remove the most material possible. Because they’re angled at 8 degrees, they provide a greater surface area for removing stock on horizontal surfaces.

Recently, the market was introduced to compressed-shape flap discs, which do both edge grinding and deburring while being effective for heavy weld removal.  Featuring a 4-degree grinding angle, the flap edges break material down more slowly. This extends life and, because the discs eliminate the need to stock different types, substantially reduces inventory requirements. This shape gives the user a tough edge and increased performance.

The two most common types of bonding and backing materials used in flap disc applications are poly-cotton cloth and polyester cloth.

The backing plate of a flap disc typically comes in three types: fiberglass, plastic, and metal.

Fiberglass, or phenolic, is arguably the most popular because it’s lightweight, durable, and forms a strong bond with adhesives without contaminating the workpiece. Because they’re made of layers, fiberglass backing plates have a higher mesh density that improves performance and durability.

Metal backing plates, most commonly aluminum, offer greater stability and support than the other two options but are more expensive. However, for applications such as metals and other tough materials, the aluminum backing material is revealed as the material wears and can gouge the workpiece, requiring additional work as well as contaminating it.

Flap density is the total amount of abrasive area used by the flaps on a disc. The size of the abrasive area depends on the number of flaps being used, the angle at which they’re used, and the distance between the flaps.

Flap discs with less density are effective for fast stock removal and heavy-duty applications, while flap discs with high density should be used for finishing jobs or for working on curved or irregular surfaces.

To get the most out of a flap disc, choose the grain material that best suits the application. The three most common types are ceramic, zirconia, and aluminum.

Thanks to recent technological innovations, the market has seen a huge spike in the use of ceramic abrasives. New, precision-shaped grains that self-sharpen and unique crystal structures that continually reveal a fresh cutting edge make the new ceramic abrasives dramatically more efficient and productive compared to traditional ceramic grains. Ceramic grains microfracture to consistently provide the sharpest edges possible. The new ceramic grains also contain a grinding aid for cooler running temperatures, which is proven to reduce the risk of discoloration and heat-induced deformations of the final workpiece.

For carbon and some stainless steel applications, zirconia is a popular grain choice for improved speed and durability. Zirconia grain provides some of the fastest removal rates of all the materials and is also designed for cool cutting with light pressure. Zirconia grains are also heat-resistant and maintain their sharpness better than aluminum grains.

One of the first grains to be used when flap discs entered the market, aluminum oxide is the least expensive grain. It’s an ideal choice for smaller jobs involving soft metals, nonferrous metals (aluminum, brass, copper, zinc, etc.), as well as composites and wood.

Grit size is the abrasive grade of a material, and what the user chooses depends on the application.

Grit sizes range from coarser, to medium, to finer. A higher grit number indicates a smaller abrasive grain and, thus, a finer abrasive product. Using a flap disc with a coarser grit size is ideal for heavy stock removal or grinding applications. Conversely, users should choose a flap disc with a medium or finer grit size for blending, deburring, and finishing applications.

The size of the discs themselves range anywhere from 2 inches to 7 inches depending on application. Smaller flap discs in the 2-to-3-inch range will outperform standard quick-change discs, allow access to tight areas, and the design will help prevent the disc from “walking” on the part.

To get the most out of a flap disc, it’s important to examine each component and make sure it’s best suited for an application. Consider everything from surface-finish requirements and efficiency to aesthetics. Doing so will extend disc life, which will enable you to get more work done in less time for less expense than using other consumable products.

" Weldcote is a great partner to have in the welding industry! Their staff is always friendly & very knowledgeable about their products. They do a great job of getting orders entered in and shipped out in a timely manner. We truly appreciate all they do in helping our business grow! " - Bobby B. @ Holston Gases Inc.

" Weldcote is a five star operation! The Weldcote operation in Braintree, MA is top notch. Their staff always goes above and beyond to assure customer satisfaction. We deal with probably 20 different vendors in any given day, I would rate Weldcote #1. Thank you Weldcote for great customer service - and that’s what its all about! " - Dave @ Daven Corp

" Weldcote has been a great vendor partner for many years! They do what they say they will do, and always do it with a smile! Weldcote takes Customer Service to another level, which makes doing business with them so easy! " - Mike Simmons @ Fresno Oxygen

" We have been a partner with Weldcote for a long time. They've not only been a great partner, but are a wonderful company to do business with. They are always willing to help in times of need and their company really focuses on customer service. We plan to be a continued partner for many years to come! " - Steve @ Ozarc Gas Equipment

" Weldcote has a friendly and knowledgeable customer service team and they are always willing to help us in any way possible. They also offer a large variety of stock and continue to add products that are beneficial to the welding industry. " - Brett Nagl @ WISCO/MEDOX

" Weldcote provides our company with the utmost customer service. The teamwork between inside and outside sales makes my Weldcote Metal purchasing quick and efficient. They provide all needed information for old and new products that our customers are requesting. Their success in customer service and having the products in stock is what I rely on!!! " - Susie Counce @ Professional Welding Supply

" We've been buying products from Weldcote for over 10 years. I'm always pleased with how attentive their customer service department is and our orders are always processed quickly. They also provide great prices in a tough market. I highly recommend Weldcote Metals! " - Deni Mueller @ Baker's Gas & Welding Supplies, Inc.